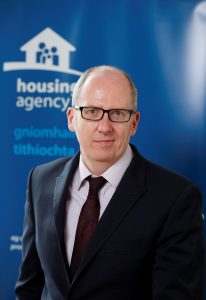 MR. JIM BANEHAM graduated from Bolton Street DIT in Dublin in 1989 with the degree in Construction Economics. After working in a commercial Quantity Surveying (QS) practice he joined the National Building Agency (NBA) in 1992 where he worked as a QS, mainly on social housing projects constructed throughout the country. Jim qualified as a Chartered QS in 1998.

In 2007 Jim took up the role of Company Secretary with the NBA which encompassed corporate governance and HR functions.

On moving to the Housing Agency in 2011 Jim took up the role of Senior Executive Officer dealing with different aspects of housing supply. In particular Jim was involved in the initial implementation of the Payment & Availability Agreement and Capital Advance Leasing Facility (CALF) funding model for Approved Housing Bodies in 2011 and 2012. Jim was responsible for CALF funding assessments in the Agency from 2013 to 2016. Jim was also responsible for Agency’s role in the national roll out of the HAP scheme from 2014 – 2016 working closely with the Department of Housing, Planning and Local Government.

Jim currently has an overarching role in housing delivery within the Agency and has been particularly involved in the Agency’s recent acquisition programme to acquire houses and apartments for social housing and in the development of cost rental housing including a pilot cost rental project of 50 apartments at Enniskerry Road, Stepaside, Dublin 18.